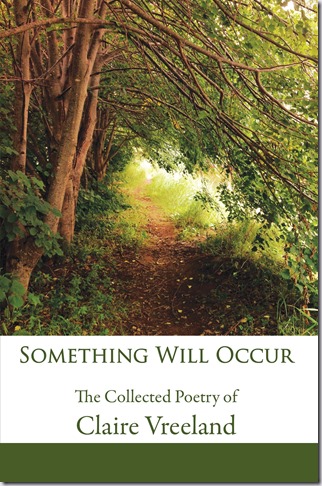 My mother, Claire Vreeland, came to poetry late in life, thanks to a woman she met while visiting my family on Prince Edward Island. That woman was Doris McKay of Vernon Bridge, an artist, teacher and Baha’i, and their meeting was a life-changing, mystical and magical experience for Claire who was then a journalist working in Connecticut.  Not so unusual as it sounds; a visit with Doris was a mystical, life-changing experience for many, and it was an experience my wife and and I wanted to give to Mom. We thought that Doris would get a kick out of it as well, and so we engineered it. In our minds, we’d take Mom there, and leave her. We knew from our own hours with Doris, that once their conversation began to flow, they wouldn’t want it to end, and it would continue late into the night and into the first light of dawn. After a nap, it would pick up again, and so it did.  We drove Mom down to Vernon Bridge and retrieved her the following afternoon.

In her latter years, Mom planned a couple of books, one of which was titled Something Will Occur. She had written her dedication to Doris McKay, as well as an introductory article “Doors of Perception,” describing that time in Vernon Bridge. In it she wrote:

For many of the visitors, most of them probably were already Bahá’ís, the visit was always a bountiful feast or a wondrous deepening that kept them talking in the muted lamplight until the wee hours of early morning. For others, the entire experience was an overwhelming revelation. None left her presence untouched and much they learned there reverberated throughout their lifetimes, prompting them to greater efforts and attainment.

Doris was never satisfied with superficial conversation. She became impatient with excessive social niceties. With Doris, you plunged right in to the very essence of reality. You became recklessly yourself at your worst and Doris would be just delighted with you because she saw you whole. She saw what it was that you could not see or know about yourself. She opened your fountain of creativity until more and more of the good and shining things began to bubble up. You and she became jolly conspirators in finding out who you really were. You would leave feeling lighthearted and free, full of life and energy. And then you would want to take those you loved for a visit to this legendary woman.

At my very first visit to Doris, when I read to her some of the story I had written about Horace Holley, she told me I wrote poetically. This was disturbing news to the print journalist I was at the time. But she insisted that I was a poet. She told me about the Fibonacci sequence of numbers that appeared in nature, in the staggered number of leaves in plants, in the whorls of the chambered nautilus, that appeared again and again in the scores of great music, in the rhythm of good poetry. Much later I was to learn more about the mathematics of Fibonacci and about poetry and creative process… and also what it is to become a Bahá’í.

She wrote her very first poem “The Yellow House” about that visit, and she continued to write poetry, finding publication in US journals and winning a few awards along the way. She later encouraged other writers through the life writing courses she taught at the local community college and through the writers’ groups she mentored.

Describing the visit, Claire said that she had read to Doris some of her writing about Horace Holley. Holley (1987—1960) was born in Torrington, Connecticut, the town where Claire worked for the Register/Citizen newspaper. She spent hours researching the man who had become a prominent contributor to the development of the Baha’i Faith in America, and who had later been appointed to a select group to oversee the propagation and protection of the Faith on an international level. They were called Hands of the Cause of God. Claire’s work on a Holley biography did no see fruition while she was alive, and fortunately her work has been taken up by Kathryn Jewett Hogenson, a skilled researcher and talented writer, author of Lighting the Western Sky: The Hearst Pilgrimage and the Establishment of the Baha’i Faith in the West (George Ronald, 2011)   Perhaps this will be Claire’s most significant legacy. Time will tell.

In the meantime, I have compiled, edited and published in limited quantity Something Will Occur: The Collected Poetry of Claire Vreeland.  The book includes a few of the poems she wrote about Prince Edward Island. (Her earlier prose about the Island appeared in her weekly newspaper columns, and one of her first articles, “Second Best Place on the Island—The Dump with a Guest Book” was included in the History of Baltic Lot 18.) I don’t expect the book to be a wildly successful commercial venture here. Most of the copies will be distributed in Connecticut and Florida to friends, relatives, and to the libraries she frequented. If libraries issued gold cards, Claire would have had several.

Compiling these poems has been a journey for me. I was surprised at the number of poems she had written. Surprised as well at some of their content. My journey has also been one of grieving and remembrance. I an earlier posting I had written about Winsted, the town where I grew up. I wrote about moving Mom to Florida and having no reason to go back to Connecticut. That post https://artsconflicted.wordpress.com/2014/07/25/no-reason-to-go-back/#more-266 was also about grieving and remembrance. Losing my father, then the geography of my childhood, and now my mother, I see the gradual erosion. The losses comprise a familial cultural heritage, and I’m further surprised to experience them as something much more than I had expected.  Putting this book together has been an attempt to put those losses at rest. Only an attempt. I hope it is more successful as a tribute to her, and to the love I have for her.

Doris McKay’s autobiography Fires in Many Hearts is available from Amazon http://www.amazon.com/Fires-Many-Hearts-Doris-McKay/dp/1895456037

Lighting the Western Sky can be purchased from Amazon as well: http://www.amazon.com/Lighting-Western-Sky-Pilgrimage-Establishment/dp/085398543X

And, as of this writing, copies of Something Will Occur (166 pages) are available from me (paul.vreeland.ca@gmail.com) for $29.95 CDN including shipping.