According to Wikipedia,  “The expression Numen inest appears in Ovid’s Fasti (III, 296) and has been translated as ‘There is a spirit here’.  The titles to my photographs are not given casually. I want my titles to capture as much attention as I would want my images to do, and where possible, I’d like the titles to reflect the essence of the particular photographic experience. Numen inest is the title I gave to this photo – a photo that I’m proud to say garnered 1st place Photographer’s Choice and Best of Show in the 31st annual PEI Photography Club exhibition. The show opened last night (September 4, 2013) and will be hosted at The Guild in Charlottetown until September 28th.

There is a spirit here. Every time I visit my mother in northwester Connecticut, I rise before dawn, and more often than not, I drive a few miles to this spot in Ashley Falls, Massachusetts – a spot I have known since early childhood. How often did my late father bring me here – a place he knew in his own Huckleberry childhood. How often did we fish the Housatonic and the Konkapot tributary that feeds into it. How often did he put his boat in at the bend in the river. And how often did our family climb aboard to cruise the placid meanders startling the painted turtles that sunned on the bleached limbs of elms fallen from the banks.

Bartholomew’s Cobble is but a five minute walk from here. During my childhood I heard rumours that at least one Disney animation artist had used the Cobble as an inspiration for the setting of Snow White and Seven Dwarfs (1937). The rumour may be unfounded, but the spirit of the place begs one to believe it.

It is no rumour that the American composer Charles Ives was inspired by the Housatonic River when he wrote the third movement of his Orchestral Set # 1 – Three Places in New England.  “This piece was inspired by a walk Ives had taken with his newly-married wife, Harmony, in June 1908 on a honeymoon hiking trip in western Massachusetts and Connecticut, a rural setting they enjoyed so much that they chose to go back to the Berkshires the very next weekend. While there, they took a walk by the Housatonic River near Stockbridge, Massachusetts, Ives recalled,

‘We walked in the meadows along the river, and heard the distant singing from the church across the river. The mist had not entirely left the river bed, and the colors, the running water, the banks and elm trees were something that one would always remember.’

Two days later, on 30 June 1908, Ives sketched some ideas to try to capture the atmosphere of this rustic scene.” (Wikipedia)

Housatonic is a Mohican name meaning “beyond the mountain place, and “Where beyond the mountain place it bends”  is the title to one of my first attempts at a panorama. It was also taken near dawn very close to where “Numen inest” was captured – or where, as Vincent Versace would have it, the image took me. The bend in the road follows the bend in the river seen at the far left of the panorama. This image is comprised of 10 vertical exposures stitched in Photoshop, and it won an “Honourable Mention” in the photo show’s panorama category.

While this spot has been endowed with meaning by my family history, I am not the only one attracted to the location.  During one pre-dawn visit I found another photographer there. He and began to chat, but when the sun’s early light rimed the tree tops we were spellbound; we stopped and turned to our cameras.  I have sometimes come across fine art painters working at their easels capturing the late afternoon light when cooler autumnal temperature have called for the annual performance of the foliage magic.  Visit the many galleries in the area and you’re bound to find visual art inspired by the Housatonic.

Last year another of my Ashley Falls images, “Housatonic Dawn”  (below. Sorry, that title could have been better chosen.) won 2nd prize in the Reflections category. All of these images were taken within 100 yards of each other. 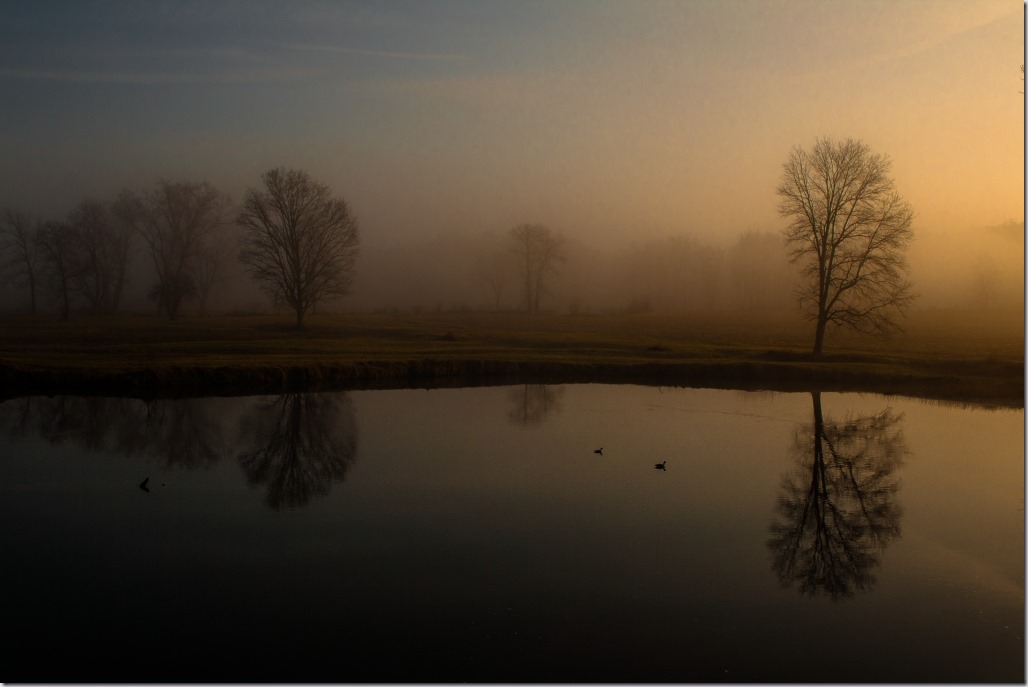 2 thoughts on “There is a spirit here”